For six years, Kim Carlyle and a small team of volunteers he assembled consistently put out superb editions of War Crimes Times, each one seemingly better than the last. He built a foundation, word by word, page by page.

Some of us remember when the concept of a Veterans For Peace newspaper started. After a successful 24-hour action exposing the war crimes of the Bush/Cheney government at the National Archives, a small number of the Veterans For Peace Direct Action Team were planning the next action when someone said, “We need our own newspaper for this next action.” Everyone present agreed, but how, and what would we call it? None of us had ever put a newspaper together or had a clue how to do it. Kim was silent for a while and then he said, “I think I could lay it out and we could call it ... War Crimes Times.” 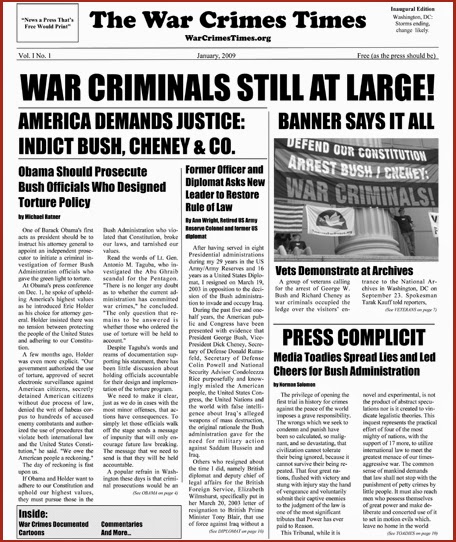 That was the beginning. The first issue came out in January 2009 with the headline, “WAR CRIMINALS STILL AT LARGE!” Some of us wrote for the paper, gathered articles, photos, political cartoons, proofread, and then we distributed that first issue in Washington at the Newseum, Union Station and other places. We all worked on it, but Kim was the cornerstone. He held the paper together, nurtured it and made it grow. Past issues can be downloaded HERE.
So it is with deep respect and gratitude to Kim and Susan Carlyle, Mark Runge, Lyle Peterson, Robert Yoder and the distribution team from Asheville VFP Chapter 099 for six solid years of dedicated service as we step up to continue publishing a VFP newspaper.
It’s a hard act to follow but we are excited by this first issue, which we are calling Peace In Our Times. In these pages we look at the Vietnam War, the continuing war in Afghanistan, torture, police repression, and more. There is a moving piece by Assata Shakur about being an escaped modern-day slave and poetry by Doug Rawlings, Mike Hastie, and Jay Wenk.
To make this new publication a success, we need your input. Letters to the editor are traditionally the most read part of any newspaper, other than headlines. Please send your letters, articles, commentary, poems, photos and graphics to peaceinourtimes@gmail.com.
We have a job to do, all of us. End war, save the planet and create a new world. We’re all in this together.