The Role of Legitimacy in Social Change 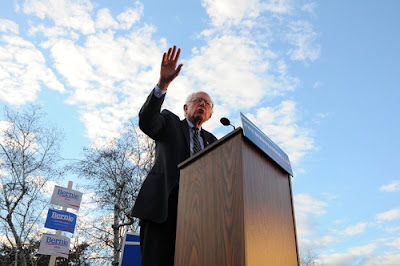 The Role of Legitimacy in Social Change
By Fred Nagel

The Bernie Sanders campaign is a welcome respite from the perpetual quandary facing the Left in the United States. His run for the Democratic nomination allows us to come together and cheer for social, economic and racial justice without making the difficult choices about where to put our efforts for progressive change.

Without a political campaign, it's hard to tell whether to protest the drones flying overhead or the fracking fluid being injected deep beneath the ground. Should the Left be resisting the "New Jim Crow" incarceration of African Americans, the indefinite detention of innocent "enemy combatants" in Guantanamo or the arrest and torture of Palestinian children by the US supported Israeli Defense Force?

As political activists in separate American communities, we make our choices as best we can. We attend small rallies and meetings. We write letters to the editor. We stand by the side of the street holding signs about peace, about the environment, about the big banks, about campaign finance reform, about cuts in Social Security. We blame the media consolidation, the lack of campaign finance reform, or the repeal of Glass–Steagall Act. We call attention to the blowback from six decades of imperial warfare, the "Cross of Iron" that the last real general we had as president warned us was at hand.

Articles in the progressive media reinforce the separation of one issue from the next. Each story begins with an historical analysis, usually involving systemic collusion between business interests and greedy elected officials. Then comes an examination of the present day mess, with innocent people suffering and no end in sight. Finally, each piece includes a couple of paragraphs about resistance: petition drives, strikes, and civil disobedience. That's it, and we are on to the next story.

The overwhelming number of issues presented leads activists to concentrate on one where we can "really make a difference." If a determined enough movement can stop the XL Pipeline, they reason, progressives can start the process of fundamental change in the US. One decisive victory is all that's needed for a new day.

That new day, however, never really comes as our present rulers quickly learn another way to exploit workers, poison the environment, or speculate wildly with everyone else's money. In the real world, each travesty of justice is inexorably linked to other corrupt forces that make it possible.

In fact, systems of oppression are like living organisms. Having evolved into highly resistant power structures, they are too complex for simple solutions. America in the Twenty First Century might be the most sophisticated system of control and exploitation the world has ever seen. Under its banner of freedom and democracy, there is no place on earth entirely free from America's high tech weaponry or its intricate web of corporate pillage.

We have to look back to the 1930's to see any dramatic improvement in the way our society is organized. And the last remaining victory of that period, our Social Security, has been on the chopping block for years, seemingly defenseless against the onslaught of Wall Street, the corporate controlled media, and both political parties.

What made the 1930's such a productive era for progressive social change? Often overlooked in the compelling narrative of FDR's life is the underlying role that questioning the state's legitimacy had to play. Even early in Roosevelt's first term, most people believed that the system was no longer functioning. And it wasn't just the working class that felt that way. It wasn't functioning for anyone, even the very wealthy.

To restore the system's legitimacy, Roosevelt began experimenting with the country's laws and structures, trying to create something new that people could once again trust. For anything can happen when enough citizens doubt the basic legitimacy of their government.The police and the military can stop defending a system they no longer believe in, and the door opens to the possibility of real change.

That is why Occupy presented such a danger to the entrenched oligopoly in the US. Occupy wasn't offering solutions like writing elected representatives, or voting for Democrats. The overall consensus was that the system didn't work and something new was needed. Most of Occupy's energy went into grassroots decision making, free food distribution, and political consciousness raising. The starting point was always the same, the system was corrupt and dangerous. It had stopped working for the 99%, and was no longer legitimate.

As millions across the country started absorbing the lessons of Occupy, our national security state, working hand in hand with corporate America, used force to dismantle the encampments. At the same time, the Democratic Party started its own "99% Spring" to funnel discontent back into the voting booths. Ever the populist huckster when he needed to be, Obama promised to end the wars, control the big banks, tax the rich, and support economic fairness for working people. Once Obama was reelected, he went back to appointing the nation's highest paid CEO's to draft economic policies for his second term.

Occupy was first smashed by our police state and then co-opted by the type of publicity campaign that has come to replace genuine electoral choice in America. Despite these reverses, the Occupy movement represents one of the most serious challenges to the state's legitimacy since the 1930's. "Why don't they offer any solutions?" lamented the establishment media, reflecting the fear of the elite that the encampments targeted the entire political system.

The monied establishment has been almost as upset about Bernie Sanders and his insurgent run for the Democratic nomination. Sanders seems always on the verge of characterizing our governing structures as hopelessly broken, yet stops short by affirming that our two party system can indeed fix the mess. Moreover, if his populist candidacy is ultimately drowned out by hostile corporate media and billionaire funded super PACs, he plans on supporting the elites' choice for the White House, Hillary Clinton. Back to the zero sum game of supporting the lesser of two evils.

More importantly, Sanders can't really talk about the American empire and its sixty some years of military expansion and world devastation. Our two party, corporate funded political system is incapable of even identifying where all our money has gone, much less articulating an alternative to the empire's reckless war making. The same is true for a discussion of our imperial colony, Israel, whose racism and war crimes are but reflections of our own.

Sanders has certainly moved the debate on economic justice and corporate control. But his followers will soon want much more, a real democracy that allows all its citizens to have a say in the direction of their country. He said in Iowa, "given the enormous crises facing our country, it is just too late for establishment politics and establishment economics.” Yet Sanders is part of that system, and pledges to remain so by promising allegiance to the Democratic Party. Like Occupy, before it, the Sanders campaign has broadened the national debate. But even were Sanders elected, would he be able to accomplish the types of changes that America really needs?

The drive to expose our government's current lack of legitimacy must never take a back seat to short term fixes that don't really change the entrenched power structure. Our Declaration of Independence shocked the world by defining a government's legitimacy as based on its ability and willingness to grant fundamental rights to its people. Moreover, it states that the people themselves will decide when a government has lost its legitimacy, claiming the moral authority to "alter or abolish" ruling systems that don't meet their inalienable rights.

Progressive campaigns in the Twenty First Century must similarly challenge the state's legitimacy. The American Empire, with its invasions, torture and assassinations abroad, and its destruction of workers' lives at home, is an abysmal failure when it comes to meeting even our most basic needs. The environmental apocalypse slowly coming over the horizon adds another dimension altogether. We are faced with an existential crisis, a fight for our very survival that will eventually sweep all pretensions of our present system's legitimacy before it.

That is why political campaigns like Hillary Clinton's may be viewed as our country's last bit of lunacy before actual change becomes possible. Backed by all the corporate behemoths, the energy polluters, the weapons makers, the financial speculators, and the media, her campaign of hope and change can be best understood as a clever but apocryphal assertion that our system can correct itself without being dissolved and replaced by something that is actually of the people, by the people, and for the people.

"Few of us," Arthur Miller wrote, "can easily surrender our belief that society must somehow make sense. The thought that the state has lost its mind and is punishing so many innocent people is intolerable. And so the evidence has to be internally denied."

It is time for the Left to end our denial. We must turn our efforts to exposing the American Empire and our current political system for what they have become, intransigent and malignant threats to the very future of life on earth.

-Fred Nagel is a US veteran and political activist whose articles have appeared in CounterPunch, Global Exchange, Mondoweiss, War Crimes Times (Veterans For Peace publication) and Z Magazine. He also hosts a show on Vassar College Radio, WVKR (classwars.org).